The purpose of this Art Gallery page is to promote Artists, Illustrators, Photographers and Designers everywhere

The Nikola Tesla Sculpture, A gift to the citizens of the United States of America

It was on Friday, July 23rd in 1976 that a large crowd of government officials, dignitaries, foreign ambassadors and a thousand visitors came together at Niagara Falls, New York  and Goat Island State Park.  ( GOAT ISLAND STATE PARK ) At 11:00am the morning skies were gray and the weather was forecasting scattered showers. The 9 foot high bronze sculpture with a custom designed granite base was created in Yugoslavia, by Croatian sculptor Frano Krsinic. As it was unveiled, the skies opened, casting shining sunlight upon the larger than life Tesla figure. In the near distance was the already existing monumental stone portal that was original to the Adams Power Plant.

Planners of the event were, Robert M.Cleary Jr., Vice President and general manager of The Niagara Mohawk Power Corporation and Nicholas A. Beldecos, vice president of the Large Rotating Appliances Division of the Westinghouse Electric Corporation. The dedication speeches were orated by Frank G. Zarb, Head administrator of the United States Federal Energy Administration under the presidency of Gerald Ford. Mr. Zarb accepted the sculpture from Dr. Ivo Margan, president of the Socialist Union of Croatia and Dimce Belovski, the Yugoslavian ambassador to the United States, who performed the actual unveiling of the sculpture. Mr. Zarb read a message from President Gerald Ford, " This is a splendid Bi-Centennial gift of a statue and was a fitting-tribute of a man of vision " The Masters of the ceremony were Orin Lehman commissioner of the New York State Parks and it's chairman, George M. Martin. The dedication proceeded with a large tent luncheon and the afternoon included a festival of dancing and singing with Yugoslavian folk artists.

( FRANO KRSINIC ) , is a renowned eastern Europe artists and is considered one the three most important Croatian sculptors of the twentieth century. He was born in 1897 in Lumbarda on the island of Korcula, his family had a long tradition of laborer’s and stone craftsman. As a young man, he was trained in the art of stone crafting in the local school, but then proceeded to attend a sculpting school in Hooice in the Czech Republic. Frano graduated there in 1916 and enrolled at the Art Academy in Prague. He studied in the classes of J.V. Myslbek and J. Stursa, graduating in 1920. In that same year he returned to Croatia and began his career as a freelance sculptor. From 1924 he lived permanently in Zagreb, teaching and lecturing at the Academy of Fine Arts.

By the late twenties his ideas of individual expression were formed, moving away from the mainstreams of art–deco. He was influenced by artist Mestrovic. In 1947 he was conferred the title of "master sculptor" and nominated as head of the postgraduate sculptural workshop at the Academy of Fine Arts. In 1948 he became a member of the Croatian Academy of Arts and Sciences. His teaching career lasted until 1967. In this long period he trained and coached a number of successful young sculptors from Croatia and abroad. In 1975 he retired from active career and on January 1st, 1982 he died in Zagreb.

The war in ( 1992 ) damaged the 3rd Krsinic sculpture, that was created in 1981, The sculpture was deemed unrepairable, so the government at great cost in 2005 arranged a new and complete plaster mold be made of the original sculpture in Belgrade. This " CLONE " was cast in bronze at the Zagreb Visual Arts Academy’s foundry in 2006. The 150th anniversary of Tesla's birthday was celebrated with the collaboration between the Croatian and Serbian culture ministries...."The monument is completely finished," Nikola Cerjanc, the deputy director of the foundry, told media recently, describing the artwork as a "masterpiece". However the government is still arguing over its installation site. 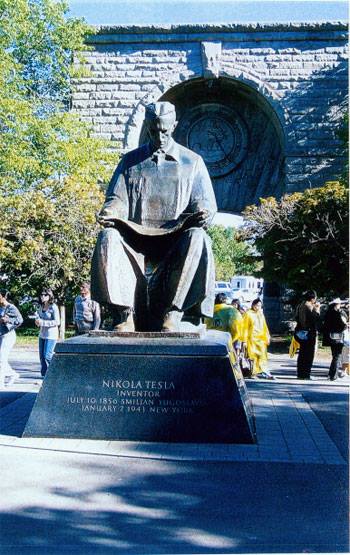 The Tesla sculpture on Goat Island in Niagara Falls, N.Y. is a second bronze casting from the original Frano Krsinic plaster mold 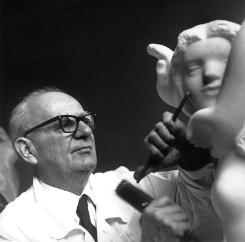 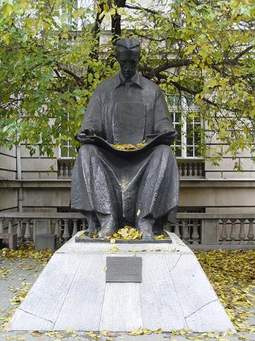 The first Nikola Tesla monumental sculpture was erected in 1963 located on the Bulevar Kralja Aleksandra, in front of the School of Electrical Engineering, at the University of Belgrade 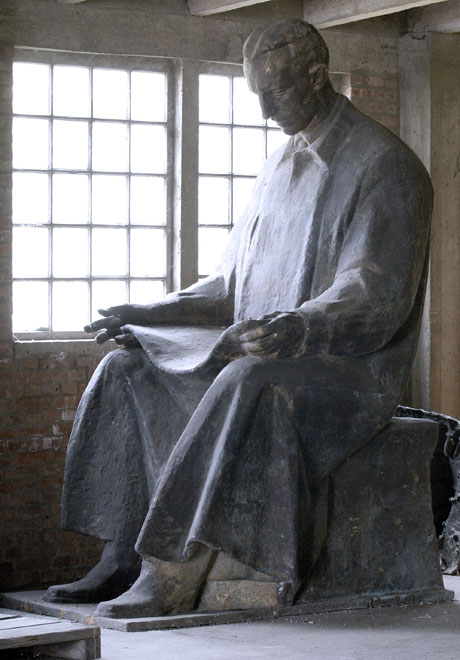 The third casting in 2006, is a " CLONE " sculpture made from a plaster mold, that was carefully created from the first bronze sculpture in Belgrade, Serbia

OTHER IMPORTANT SCULPTURES OF NIKOLA TESLA

Nikola Tesla and Ivan Mestrovic started corresponding in 1922, In 1924, Tesla met the internationally renowned Croatian sculptor Ivan Mestrovic in New York City, who there after became a close friend to Tesla. In 1939 only 4 years before his death on 1943 ,Tesla wrote a letter asking Mestrovic to create a sculpture ( bust ) of him.

Soon after World War Two, in 1946, Syracuse University in New York State, U.S.A. offered Ivan Mestrovic a professorship, and he moved to the United States. He was awarded the American Academy of Arts and Letters' Gold Medal for his sculpture work in 1953. The U.S. President Dwight D. Eisenhower personally presided over the 1954 ceremony granting Mestrovic American citizenship. He went on to become a professor at the University of Notre Dame in 1955. 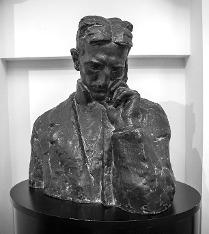 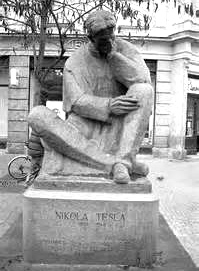 Mr. Leslie Drysdale was born in Hamilton, Ontario, Canada in 1961. He graduated from the Fine Art Department at the University of Guelph in 1985. He specialized in 3-dimensional Art and sculpture. Les Drysdale worked as a full time artist and sculptor ever since. 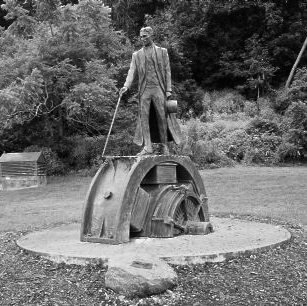 Artist-Musician-Educator, Matt Rebrovic created this monument near Pittsburgh, P.A. of Nikola Tesla which was later installed at the Serbian embassy in Baku,Azerbaijan in 2006, 150th anniversary of Tesla’s birth American born, Matthew Rebrovic, a Tesla Fan, born of Yugoslavian parents and ancestry, created two different sculptures of Tesla. A smaller bronze was purchased in 1996 by the Nikola Tesla Society of Midland, P.A. for the Serbian National Federation’s Museum in Pittsbugh, P.A. Tesla’s nephew, William Terbo, was on hand to officially receive the sculpture. 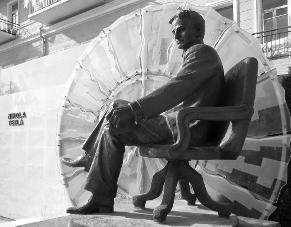 The 8- Page GATEWAY ENTRANCE to this Web-Site is located at the TOP .....ENJOY !

GO TO - TOP OF THIS PAGE