Schoellkopf's Station No. ( 1 ) was the first hydro station ever built down in the Niagara gorge, it is marked with the red ( 1 )  it is the smaller building at the right, at the bottom of the gorge. It was apparently opened in 1889, and was actually built to re-use a water plume that was the tail race of another mill, located directly above it, at the top of the gorge. This lower station which became known as Schoellkopf No. 1 was also variously referred to as the Quigley Lower Mill, or, as the Cliff Paper Co. Lower Mill.

The older mill at the top was the Quigley Upper Mill ( also known as the ( Cliff Paper Upper Mill ), which got its water from the hydraulic canal, whose inlet was on the Upper Niagara at Port Day. After use, the Upper Mill's water was then discharged out the cliff face, only utilizing a head of about 75 feet: it was the unrealized potential of this tail-race water, until then wasted,  which Schoellkopf decided to utilize for the Lower Mill ( later known as station No. 1) taking advantage of another 125 feet of remaining head. In 1881, the Quigley Upper Mill was already producing 1,800 HP of ( Direct Current ) hydro electricity, supplying power to the Oneida silver-plating works and another machine shop in the immediate canal area, and apparently was even exporting some electricity across the river to Niagara Falls, Ontario, Canada.

TOP-photo on right:  dated circa 1889 - the Oneida silver-plating plant is titled at the upper right in the photo . It's interesting to see here that down in the gorge, the Schoellkopf No.( 2 ) station is clearly seen just (  partially  ) built, still under construction! There is a vacant area between the north-wall of the Quigley Lower Mill/Schoellkopf ( 1 ), and the partially built Schoellkopf ( 2 ). Note that Station. 2 is seen with only its northern spillway built. In the lower photo, arrows

( 3B ) and ( 3C ) show where the future Schoellkopfstations would be built; it is this maze of tunnels and pit shafts, as seen here, which honeycombed the cliff, which may have contributed to the eventual collapse in 1956.

This lower-photo is looking at the Schoellkopf site in the Mill District, as it was seen on Jun.24, 1907.  Schoellkopf Station 2 is marked ( D )  in red, at the lower center of the photo. Note, compared to the TOP photo, that Schoellkopf 2 is now fully built, with three spillways visible.

At the time this photo was taken in 1907, Station. ( A ) would have been under construction, further to the left, out of frame.The Oneida Community factory was located at the upper right of the photo, just a bit over to the right of the red ( B ) . It was the taller building at the upper-right, with the large chimney seen standing just to its right. 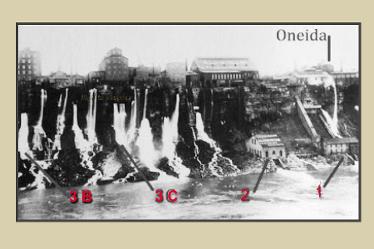 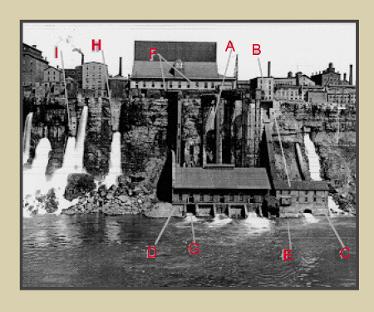 There was much discussion during those two years of 1889 through 1890 as to how to transmit huge amounts of Hydro-electricity from Niagara Falls to Buffalo, New York. The great debate was primarily focused on ( DC ) power stations and ideas from Thomas Edison and other distinguished scientist that included Dr. Henry Morton of the Stevens Institute of Technology, Frank J. Sprague, electrical engineer, A.I.E.E., Dr. Henry Augustus Roland, Physicist, John Hopkins University, and Dr. Coleman Sellers, Engineer in Philadelphia.

A 2004 power-point presentaion by Craig A. Woodworth, University at Buffalo

ARTICLE from the 1908 issue of Popular Science Magazine

By Craig A. Woodworth, The Shoellkopf Disasater .....Aftermath in the Niagara Gorge

The Day they turned the Falls on, by Jack Foran

The Project Gutenberg EBook of The inventions, researches and writings of Nikola Tesla,

The 8-page GATEWAY ENTRANCE to this Web-Site is located at the TOP ....ENJOY !