This page is currently in a extensive research and updating phase: ... November 4, 2015

Quote from a Worlds Fair brochure

“It does not matter by which of its entrances you approach the Fair; whether you come by water or whether you come by rail passing through the splendid vestibule which this building forms, stand in the Plaza, with the fountain in the foreground and the Basin beyond.

It does not matter, for in either case your point of view will have been carefully planned for as a first point of view. First impression always count for much; and the way in which our Fair builders have thus provided only two great entrances, but have given each of them monumental magnificence, and opened in front of each the most splendid and harmonious of their vistas, is certainly one point where they have proved their superiority to the builders of any previous exhibition.” 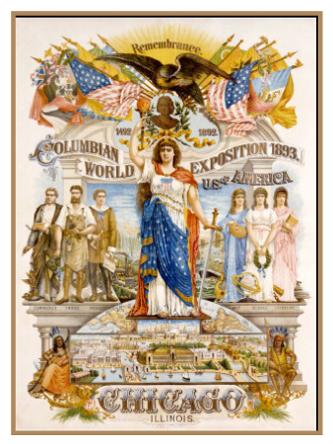 Electrical energy at the 1893 Chicago Exposition

The 1893 Chicago Colombian Exposition had many buildings with various themes. One of the more important was the “ International Exposition ” held in the very beautifully designed ( Electric building ) which was devoted to both ( DC ) and ( AC ) electrical exhibits. During the planning, two American companies were competing for the bid to light the entire exposition grounds. The ( General Electric Company ) was backed by J.P. Morgan and Thomas Edison who had proposed to power the electric exhibits with ( DC ) direct current, originally at the cost of U.S. $1.8 million. After this exorbitant profit-making offer was rejected, General Electric rebid their costs at $554,000. The other contracting bid was proposed by the Westinghouse Company whose design was to use its ( AC ) alternating current system to illuminate the Colombian Exposition in Chicago. Their bid came in much lower at $399,000. This was the key event and historic point in time that caused what has been famously known as the “ War of the Currents “.

All of the large exhibits were from commercial enterprises. Thomas Edison, Western Electric, Brush and Westinghouse had exhibits. General Electric decided to ban the use of Edison's lamps in Westinghouse exposition lighting plan in retaliation for losing the bid. The Westinghouse company quickly designed a newly patented ( double stopper light bulb ) and was able to light the fair grounds. This newly designed Westinghouse light bulb was invented by Reginald Fessenden. ( Fessenden later became the first person to transmit voice by radio ) He ingeniously replaced Edison's delicate platinum lead-in wires with an iron-nickel alloy and therefore greatly reducing the cost and increasing the life of the lamp.

The 8-Page GATE WAY ENTRANCE to this Web-Site is located at the TOP ....ENJOY !